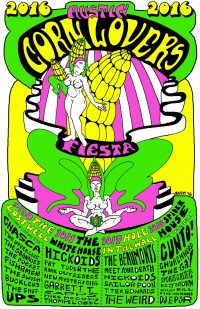 The Austin Corn Lovers Fiesta is a mini, floating club festival held in Austin, Texas and is hosted by the Hickoids and the Saustex record label

Saustex and the Hickoids are pleased to be presenting the 7th Annual edition of The Austin Corn Lovers Fiesta.

This year's lineup represents a return to the core values and mission of the Fiesta...affordable fun and arse-kicking local and regional bands in a friendly and adult setting.

The four-night, floating club mini-festival was originally conceived by the Hickoids as a dig at the similarly acronymic behemoth Austin City Limits Festival which didn’t seem to feature much Austin music. Staged entirely without sponsorship, the totally independent festival has taken on a life of its own and previously featured headliners including David Yow, Old 97’s, Wreckless Eric, Blowfly, Mike Watt, Hamell on Trial, Davie Allan & The Arrows and BP Fallon surrounded by local talent and Saustex label acts.