Coyote Music recently caught up with Charles Corby, a solo alternative rock artist from Melbourne, Australia. We talked to him about a wide array of topics ranging from his forthcoming album to Mozart's Requiem.

Coyote Music: Being from Melbourne, what artists have inspired you? And how much influence comes from fellow Australian musicians, versus the U.S. or U.K.?

Charles Corby: Hi and thanks so much for having me. It’s funny you say that actually because I was just thinking about where my influences are from. I think I tend to primarily follow the US music market more than Australian or UK. I think I’ll probably end up in the UK, I dunno, but I’m really ashamed that I know hardly any classic Australian artists. Anyone that has been in the media like Delta Goodrem or Kylie Minogue I know, but really it’s the people I like more than the music. From where I stand, I don’t know anyone around that makes the same type of music as me. I think Australian music in general is pretty relaxed and casual, and that’s where I don’t fit in.

CM: You mention in your bio that in addition to Bjork, Smashing Pumpkins and others, you credit classical composers for their influence on your music. Which ones, and what about their music relates to the music you create today?

CC: That’s a good question which I’ve never been asked. It’s a hard question because I would find it hard to name a whole bunch of classical composers and their works off the top of my head. I grew up listening to classical music and I think that’s really what I mean by my influence; the forms and concepts behind the genre. I went through a requiem stage where I went and looked up practically every requiem that had been recorded, but if any stood out for me it would probably be Mozart’s [Requièm Mass in D minor] which actually heavily inspired one of the songs on the record (working title "Air to Breathe"). Before I wanted to perform my own music I used to want to be a film scorer but I suppose both are equally as expressive. 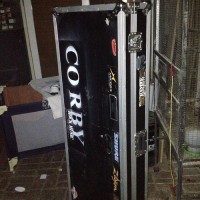 CM: When you sit down to write music, where do you start? Are you a keyboard and computer-based writer, or do you grab an acoustic guitar and translate it to other instruments after getting down the core concepts?

CC: I sit down and mull over whatever I’m going to write about. I find it so mundane to sit down and try and write a pop song or a song about nothing in particular, because it’s like intro, verse, chorus blah blah, so structured. The songs that made the cut to this record are fairly unconventional in their structure, but still are relatable. They aren’t like Bjork’s music where you get lost in it after about a minute. I sit down at my big old piano and write some intricate sort of piano thing, whilst adding vocals. Depending on how much coffee I’ve had, I may write in the guitar parts or string parts in my head in the same sitting. I like everything to be mixed in whilst writing. It feels more organic that way.

CM: Tell us about your forthcoming album? When? How many songs? Where will people be able to find it? Is there a working title?

CC: My forthcoming album is a demo CD I’ve been working on for about 4-5 years or so. Obviously it’s not going to be great because nobody’s first album is great, but I feel it’s a defining album for me and I’ve nurtured it like a baby. I was advised to take down all my music that was on the net whilst working on this, and from there it kind of made sense just to publish finished works that represent me. I’m going to record a dummy copy in the next few weeks to send to a couple of producers I’d be honored to work with, but apart from that it’s all moving fairly fast at the moment. There are 4 tracks, and people will be able to find it everywhere. I’ll be the one uploading it to all the torrent sites, if I can work out how to use a computer by then, and giving away all the free copies I can afford. Working title is VIRGIN.

CM: Who should take note of this interview and keep an eye out for your record?

CC: I think anyone who is interested in piano based music as opposed to guitar based. I mean, there’s some heavy electric stuff in there but certainly no acoustic at this stage. You could probably draw a comparison amidst the fog between some elements in it with Evanescence, Bjork, We are the Fallen, Nicholas Roy, the Romeo and Juliet soundtrack, and Plumb.

CM: What's the best way for a potential fan of yours to find you on the world wide web? Are you a big Instagram-er? Tweeter? Will you be on Reverbnation or iTunes?

CC: I work with a publicist who is very good at staying connected, so any social networking platform is where you’ll find the music when it’s released. Probably the most personal one though is Instagram because I post little pictures of my music journal and little artworks and stuff too. They are all just under my name.

CM: What else would you like to share with Joe Music Fan, reading this on their iPhone during math class?

CC: Hopefully Joe is in year 10 and is allowed to drop maths next year if he hates it and take up what he loves instead. I realized I could do what I was passionate about at that age, and it was the best decision of my life. Every day I wake up, and although often just a lot of pressure hits me over the head, I think "I am so darn lucky."

CM: Great point! Pursuing music is what makes most everyone who visits our site tick, each and every day. Charles, thanks for taking the time to visit with us. And best of luck on the new album!