Miami-based Rapper T-Ro Inspired by Birth, Death, and a Missed Shot at the NFL

24
Apr
Miami-based Rapper T-Ro Inspired by Birth, Death, and a Missed Shot at the NFL

T-Ro was a top football prospect whose true calling is his music. Following in the musical footsteps of his late uncle, renowned rapper Ran Rover, T-Ro is working on his sophomore mixtape "Monsters Under My Bed" with Super Producer 100 Da Beat Monsta & others, like DJ D-Wiz, Kam, & Audio Jones.

What gets you up in the morning? Do you feel an urgency every day to achieve your dream? Miami-based rapper T-Ro lives with a purpose. Driven by love for his family, and sensing a higher calling, every day for T-Ro is a day meant to further his career in music. He uses the sacrifices from his parents to fuel his fire as he walks his musical journey.

Crystal clarity was not always the case, however. Football originally ruled T-Ro's world. He was a highly sought after prospect who followed his opportunities to play college football in Tennessee. It was some sage advice from high school coaches that kept him grounded. He recalls, "coaches used to say half of us players aren't going to college, and less will make it to the NFL. Always have 'Plan B'."

"Your dream doesn't always match up with your calling. [My] dream was to be a professional athlete, [but] my calling is music."

It was a combination of tumultuous life events over several years that turned T-Ro from football to music. The birth of his daughter changed his life, admittedly leading him to focus better on his goals. T-Ro also maxed out on his football potential. Like many very good players, T-Ro wasn't drafted nor did he get picked up as a free agent by the National Football League. Then there was tragic the death—murder—of his uncle, the up-and-coming rapper Ran Rover. 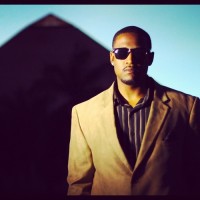 The story of Ran Rover is better told elsewhere. But according to the Miami New Times, his 2004 debut album "Ride with Ya Boy, was among the strongest local hip-hop debuts of recent vintage. It featured Snoop Dogg, JT the Bigga Figga, and Juvenile." In December 2005, Ran and a friend were found dead in a car outside a Miami apartment complex.

Without a doubt, T-Ro looked up to, admired, and aspired to follow a musical path similar to that of his uncle. In December 2005, Ran and a friend were found dead in a car outside a Miami apartment complex. T-Ro had the opportunity to work with Ran Rover before his death, and being around that sort of talent and passion left a strong imprint.

T-Ro began to freestyle while still in college in Tennessee. His first serious attempt at rapping was to Birdman’s “Money to Blow (featuring Lil' Wayne).” After getting comfortable with his own flow, he recorded himself rapping over an instrumental version of J Cole’s “Premeditated Murder."

With his football career over, T-Ro felt he had the talent, drive, and familiarity with the rap game that he would need to succeed. He set out on a mission. With musical inspiration from Jay-Z, Kanye, Drake, J Cole, and Rick Ross, along with a team of believers, T-Ro put out his first mixtape, Draft Day. With contributors including producer 100 Da Beat Monsta (T-Ro’s cousin and business partner who has produced tracks for Mya, Trina, Trick Daddy, and Iceberg), Draft Day was released online at datpiff.com in May 2012.

T-Ro continues to be encouraged by his collaborations. He has been fortunate to work with numerous talents, including multi-platinum producer Nick Fury, B.O.B, Lyriq Tye, G-Rob, J-Euro & J-Knocka, just to name a few. T-Ro is currently in the studio working on his next mixtape, due out May 2013. Monsters Under My Bed is being produced by 100 Da Beat Monsta.

T-Ro has gained the support of world renowned sponsors Rasool's Menswear and Dope X Gold. He is also working on a brand known as the Gold Cigar Gang.

"Gold Cigar Gang" came from something that represents Him. Gold stands for something that's priceless, never loses value, remains pure, genuine, and prestigious. Cigars represent a lifestyle of better living, symbolizing that we're on a different level of living.

T-Ro is determined to be successful: "I'm not going to stop until I get what I deserve." Having experienced the loss of Ran Rover and the disappointment of missing out on an NFL career, T-Ro's passion is unrelenting, showing no signs of discouragement. He has instead turned negatives into positives, and feeds off his inspiration from he parents and his daughter's birth. T-Ro is on a path to stardom, achieving what he believes he's been called to do:

"I was called to do music. My calling is my purpose. Ima give my calling to the world, and give it everything I got.