Coyote Music caught up with Louisiana rapper T-Baby, talking inspiration and branching out from across his parish to across the nation.

Coyote Music: T-Baby, you're from St. James, Louisiana. Tell us what's up in St. James? Do you have much of a scene going on, or are you looking to larger cities where you can take your music?

T-Baby: People in the St James area know of me and my style of music. My music is not really supported in the area that is the reason I branch out to bigger cities for more exposure. I think in the bigger cities there is more support to all styles of music. The people don’t just listen to what’s in rotation on the local stations.

CM: Who are some of the artists who have inspired you to rap?

T-Baby: Jay-Z, J. Cole, Wale, Kanye West, Soulja Slim, Tupac, and Notorious Big to name a few. There are many more but those are my favorites.

CM: How would you classify your style? I hear a slower, Southern vibe to your rhymes...but is that a fair label?

T-Baby: Yes it is a slower southern style vibe. I try to put a different touch on my music. I don’t want to sound like everyone else in the music business. Many artists these days try and imitate what’s being played on the radio. So I have to work extra hard to gain my fans.

CM: Talk a little bit about The Beat Killer.

T-Baby: The Beat Killer is the opposite of what’s played on the radio. It is true life stories about me and my struggles.

CM: And now you have another mixtape coming out? When and where can people expect to find it?

T-Baby: It’s actually an album instead of a mixtape. I don’t really have a set date for the project as of yet. This album will have better production than my mixtapes. I am still working on finding beats that will cater to my style. If anyone has any beats to send me they can send them to my manager at DamoEntertainmentstl@gmail.com. 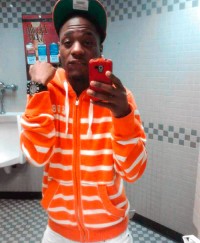 Selfie in the Men's Room

CM: What are your goals with your music? Are you looking for a major label, or do you play out a lot live, or are you just looking to build from St. James and spread your sound from there?

T-Baby: I am looking for a major label if the contracts are right. Being signed with a major label is not always a good thing. If they are putting in the work that is required of a label then I wouldn’t mind being on papers. I want to build from St. James because this is my home town. So many artists want to move to other cities to try and become famous. My question is, “How can you become popular in another city, if you haven’t gained the respect and support from your own home town?” If an artist moves to another city they have to start all over.

The best thing to do is stay in your home town but let the people there know you are creating exposure for yourself in and out of town.

CM: What artists today do you consider on top of their game?

T-Baby: Drake is one of the artists I feel is at the top of their game right now. He did take a break for a moment but that was to get his high school diploma. Can’t do anything but respect him for that. But now that all of that is finished, he is moving back to the top of the charts in the hip-hop industry.

CM: Kanye seems to be a dividing force--is he a sellout corporate type now, or does his music, message, and hype still push the envelope?

T-Baby: Kanye is a force to be reckoned with in this music. He knows exactly what to do to keep his name relevant. I wouldn’t say he is a sell-out corporate type because many artists do what they have to do to keep the money rolling in. If we say Kanye is the sell-out corporate type then we can say that for almost all the mainstream artists. Many of them don’t even control the type of music that is released and some of the music that is different from what the radio play is never promoted. Only negative music is played, you hardly ever hear a mainstream artist rapping about something positive.

CM: Are there other artists from St. James who people should know about, or will you be the first?

T-Baby: There is one group called Silver Black Mafia from my area. They are under the Universal Music Group and working on an EP. Be on the look-out for those guys.

CM: What else do you have going on that you'd like people to know about? Any shout outs?

T-Baby: The album is really my main focus right now. It will be distributed by Tak Music Group in the next few months. The album will be called New Talent on the Rise: From Nothing 2 Something.

First I want to thank god of course. I want to thank my little baby girl and my family. I also want to give you a shout out I really appreciate the interview. Also, my manager Damo for linking this up and everything that he is setting up for me. And of course my support system which also consists of my family and my wonderful fans.