How does a 13-year-old drummer end up playing in a rock n roll band with the big boys? Blame Neil Peart.

This story goes back to when Daniel J. Legend Miranda was 7 years old and his father took him to see Rush perform in Tampa, Florida. Daniel’s father was a lover of music and appreciates talent, but never expected his son’s life to change after seeing Neil Peart’s drum solo. For the entire month following Rush's concert, Daniel J. begged for a drum kit of his own. Eventually, Daniel J’s father bought a electric drum kit and paid for lessons. Unsurprisingly, Daniel J. was on his new kit every day before and after school, clearly honing his skills.

At the same time, a 15-year-old friend of the family named Steven Dalouche stopped chasing his dreams as a rapper and took up bass guitar. Daniel J’s father made a deal with Steven: “I’ll buy you a bass and amp. But you have to play, learn, and create music with my son.” The deal was done. The duo practiced, jammed, and wrote music every chance they had. Even to this day, some of their compositions are still being used by the yet-to-be-named band. 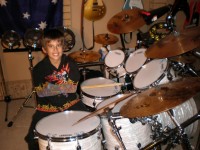 The dream was quashed, however, as Daniel J’s family moved to Australia...until, in 2010, Steven finished high school and made the bold decision to move to Australia to keep the dream alive. Within 24 hours of reuniting, the pair was in the garage anxious to continue from where they left off. They wrote fresh new songs consisting of rap and rock elements, including their band's eventual first single, “Gotta Get Out.” Now that they had played together, written together, and grown as musicians, they decided to search for a guitarist to complete the band.

The search was underway: they gave every guitarist a shot, but seemed to lack a crucial quality—some had skill but no dedication, some had the dedication but lacked chemistry and creativity.

Then along came a 17-year-old Jesse Murray. He suited the band’s needs perfectly with his unbelievable solo skills, along with the duo's unified vision of the band’s future. This addition easily made what was already a unique band, even moreso.

“When I auditioned for the band, I saw a 10 year old kid judging me [and] I honestly thought it was a joke...until he played one of his originals and absolutely blew me away.” – Jesse Murray, United States of Oz guitarist

The trio had been formed, and now only lacked a name. As a joke, they called themselves the “X Backstabberz” because of how drastically different their music reflected the band name. They scrapped that name and realized they needed something that suited them. The United States to Australia connection kept resurfacing. Since the band started in America and wound up in Australia, they considered names like “From United States to Australia” or “Ozmerica.” They finally found themselves with United States of Oz, or “U.S of OZ.”

In the studio, 10-year-old Daniel J. not only kept up with his fellow band members, but he finished his sessions the fastest and with great ease. People who were at first very skeptical of this little boy, now began to see that his age didn't prevent him from rocking the hell out of his drums. U.S of OZ was on a roll, focusing the next few months on writing original music. With more songs in-hand, they were ready for a bigger step.

In 2011, the trio recorded their first E.P titled Not Afraid at Alchemy Studios in Brisbane. The name simply signifies that they weren’t scared to be different—from age, to race, and especially music style. The EP was a success for the band. The first single immediately received airplay Rebel FM (Brisbane) and Bay FM (Byron Bay).

In 2013 the band has a dedicated fan base and a Facebook page with over 7,000 likes. They have played pubs and festivals (“The Zoo” in Brisbane, “Miami Shark Bar” Gold Coast, “The Wall” in Sydney to name a few) and have played/won numerous “Battle of the Bands” competitions.

U.S of OZ is dreaming big but slowly making it a reality. They have a second EP, Prove Yourself that’s currently in post-production with an expected release date of September 5. The five new tracks are not only catchy, but light years ahead of Not Afraid, technically speaking. Already, the band has written well over another album’s worth of songs. And on the live-show front, they perform most every week, with no signs of slowing down.