Nina Diaz stars as herself onstage at The Belmont in Austin, Texas for her June residency with her brand new band.

Are you breaking up
Girl In A Coma? Just about one year ago, the San Antonio Current did a cover story on Girl In A Coma singer Nina Diaz. The story focused on Nina's sobriety, spirituality, and attraction to aspects of the Hare Krishna lifestyle.

Earlier this month, when I caught up with Nina at her mom's house (which doubles as a rehearsal studio for her new solo project), she was happy to share with me that she's been sober for over one year. But while she's stayed sober, she hadn't stayed as close to Krishna-ism. "In fact, I just put my Tulsi beads back on last night," she said, as we talked about Nina finding herself through her music and new band. 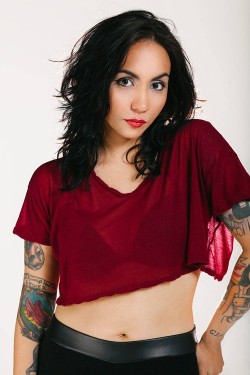 As GIAC's own members and the media alike seem to agree, the band hasn't broken up. But with drummer (and Nina's sister) Phanie Diaz and bassist Jenn Alva on the road with their new band, Fea, and Nina about to begin an eponymous residency at The Belmont in Austin, it's evident that GIAC was at least overdue for a bit of a sabbatical.

At one point, Nina rhetorically asked, "How can I stand alone? I've been part of the band from the very beginning, age 13, but haven't really been able to discover who I am as an individual."

Elaborating on individuality versus being part of the band, she spoke of the songwriting process within GIAC: "I wrote all the songs and lyrics, I'd show them to Phanie and Jenn, then they'd make their parts their own. It was everyone's music. From the moment I bring the songs in, it is a complete democracy. The songs stop being mine and become the bands'...and that was good. It's a process that works really well for our band."

But then more recently, she began to bring in more complete ideas. "I found myself writing the bass and drums. I'd hear this exactly. 'This is how it's played.' And i didn't want to push that on [Phanie and Jenn]. This is something I need to do on my own. I wanted to write every little thing, but not in a stubborn way."

"'Are you breaking up Girl In A Coma?' People have asked me that and said good things and bad things about it. It's like when The Smiths broke up and people asked Morrissey, 'What the hell are you doing?'" In several different ways, Nina reiterated that this is about self-exploration and self-discovery.

When Girl In A Coma does come back together, we'll be 1,000 times stronger than we were before. Does she have any regrets? Yes. And she readily shared them.

"If I regret anything at all [about only being a part of GIAC thus far in her life], I felt like I wasn't really present. I really wasn't mentally there. Now I'm giving another chance to show this 13-year-old girl how to do things, and really experience them this time."

So for the time being Nina is growing apart, or at least growing separately from, her longtime bandmates. But she doesn't see that as a bad thing for GIAC. "With Phanie and Jenn touring with Fea, and me doing these solo songs, when Girl In A Coma does finally come back together, we'll be 1,000 times stronger than we were before." 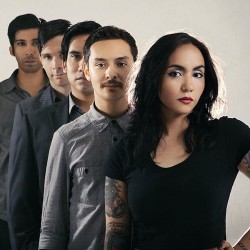 "The very first time I played with musicians [other than Phanie and Jenn], I was in Austin for a SIMS Foundation "Femme Fatale" show. That was really scary for me. We couldn't read music. And the musicians around us were so good. That showed me then that I have to push myself. It's all about growing." And now, this very week, she's grown into her own—the marquee lights will show nothing other than her name.

But this move is not one marred by insecurity. "I'm not really nervous about my solo project because I'm being myself. People will judge it—some will like it, some won't—and that's fine. It's not going to be better or worse than anything else out there. It's going to be me. And people will judge me: physically, musically, or however. And that's okay."

"It's better than I thought it would be," said Nina of her new band. She chose not to go out and get a line-up of studio pro's that her connection to Joan Jett might facilitate. "It had to be people from San Antonio, or close by, just to make rehearsals doable. I had a person in mind for the drums from the start. I'd just worked with David Garza and he was almost a part of it, but he's got his own thing going."

There will be no filming at The Belmont. Put down your phones and listen to the music. Enjoy it. Feel it. "On drums, Jorge [Gonzalez] is Pop Pistol's drummer—I wanted someone with experience using samples and triggers, plus I've known him for years. Jorge connected me with Travis [Vela], from the band Bombasta. We met, he seemed cool, no weird vibes. His roommate Jaime [Ramirez] played keys, and that talk went well. Then Justin [Carney] came it through the other three guys."

From the first day, Nina was in the driver's seat of her new project. "I showed everyone the songs, wrote out the lyrics. Thankfully they liked the music—that makes it so much better. And it's working great because of communication. That's the key: even if you may not want to say something, if something's wrong, it's got to be said."

"I want the performances at The Belmont to be the first exposure of this music. I didn't want to put out a recording beforehand because I want these live shows to be an experience, themselves." Nina touched on the solo shows she did at Los Angeles' Hotel Cafe. A fan recorded several songs, blogged about them, and posted them to YouTube.

We talked in depth about her emphasis on the live debut of these songs. Was she upset about the fan posting her songs, revealing them before they were ready? "No! Not at all! I was happy people got to know the songs, even just the solo versions." But Nina is less enthusiastic about fans recording at The Belmont. 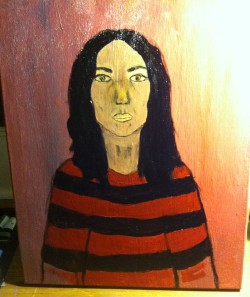 A Self-Portrait, in progress

"There won't be any filming. I'd like people to be completely engaged in this show. Put down your phones and listen to the music. Enjoy it. Feel it."

"[Lyrically,] a lot of these songs are about my sobriety and how I found it, and my spirituality and how I found that. I'll grab ya and make you wanna cry. Some people might not like it, but others may say 'Shit, she's right, I HAVE felt that way before!'"

So what do these new songs by a new band sound like? "I've always been a huge fan of Jeff Buckley, Bjork, Mike Patton, Michael Hutchence. Those influences come out in this music. Little bits of PJ Harvey. Metric. These songs capture a little bit of all of this, stylistically."

Beyond originals, Nina and the band will be throwing in some covers but she remained tight-lipped as to what they might be. "I'll just say that they're by some of my influences." So if you can bring to mind the entire discography of all the artists listed above, you may be on the right track.

So it all comes to this. Just about two days to the hour from the time Nina Diaz takes the stage as a bona fide solo act, she's ready. "If I'm not ready for this, I might as well stay in my room and just play for myself."