"I think this is the loudest band in the entire festival," commented one audience member, who was on her fourth straight day of helping run the inaugural Viva Big Bend music festival and industry conference. Indeed, that was the case. Most of the 50+ artists booked that weekend ran more along the lines of singer/songwriter, Americana, or venturing into the realm of pleasant, organic country, rock, and bluegrass. But the Hickoids were a special case...as they tend to be.

The crowd at Padres had just been treated to a sweet, endearing set by Matt the Electrician, who was joined onstage by Scrappy Jud Newcomb. Matt ended with an audience request, a delightful narrative called "Angela" about his reluctant but surprisingly helpful experience at a Walmart auto service center. Transitioning from that to the Hickoids could not have been more of a shock.

While the Hickoids put on an admittedly "safe" set by their standards, their "safe" is another band's "utterly debaucherous." They were loud, to be certain, but lead singer Jeff "Smitty" Smith remained relatively sweat-free and fully clothed further into the set than usual. The audience even seemed cautiously optimistic that the Hickoids were merely a louder version of some of the rockabilly bands they'd seen earlier in the fest. 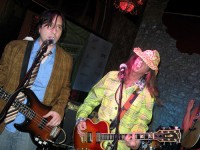 Maybe it was the smiling Lance Farley, the Hickoids' new drummer. He and the sportcoat-donning bassist, Rice Moorehead, laid a tight groove that many raucous bands tend to lose sight of amidst their raucousness. Then there's Davy Jones and his color-caucophony of a suit and cowboy hat. Between musical tightness, a pleasant appearance, and Davy's visual humor, the crowd seemed ready to embrace the band despite the volume being a bit on the loud side.

It wasn't until Smith hollered a few particular lyrics that the tide began to turn. In "Stop It You're Killing Me," he tells a story set at San Antonio's legendary punk venue, Taco Land. The lyrics include a groupie explicitly requesting a few favors involving her genitalia. At that point, Padres didn't empty out. It more accurately...altered its state. By the end of the show, the crowded room was comprised of entirely different people—younger, drunker, and a bit more Hickoids-appreciative—than those who had watched Matt and Scrappy Jud.

The Hickoid's show was spot-on. Though more conservative in their presentation than usual, the Hickoids always put on a boisterous show that's musically tight and infused with the essence of sex, drugs, and rock 'n' roll. Onstage the Hickoids emit a humble-yet-cocky confidence, almost an indifference to what's around them. They seem cock-sure that they are the most compelling band on any given bill (and few would argue otherwise). On a night when they were sandwiched between Matt's amiable songwriting and Texas Tycoons' adult contemporary cover tunes, the Hickoids ruled the roost by virtue of default. And as the next-to-last band of a 4-day festival, the Hickoids left Marfa and the Viva Big Bend festival with a unique, loud, and poignant musical taste in their gaping, wide-open mouths.