Jasmin Dolly is a London-based, self-starting pop sensation who's made her own waves, turned heads to her sound, and is beginning to take UK stages by storm

Jasmin Dolly began her musical career in 2012. Say that to yourself again, yes, it's just a year ago. And in that short time this completely independent artist—nary a manager or financier in sight—has managed a full-time college load whilst collecting accolades and landing herself a booking in front of 10,000 people at an upcoming UK pop festival.

Jasmin has Moroccan and Middle Eastern roots, but was born in London, raised in Kensington. "Dolly" is a childhood nickname, given by her mother for Jasmin's regular sessions of dressing up as her favorite dolls. The name stuck, following her into school—not just any school, mind you, but the Sylvia Young Theatre School where none other than Amy Winehouse and UK pop sensation Rita Ora studied—where Jasmin would accurately describe her own music as being "Dollified."

I've come so far, yet I'm still no where close. This has been a dream I wanted all my life. I started this, and now I'm not going to stop. All I want is to make good music." 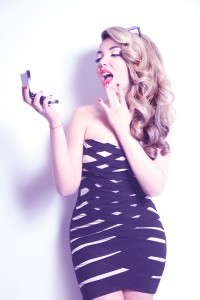 In her short career Jasmin Dolly has amassed some impressive achievements. She was a star guest of honor in the 2012 UK Arab Achievement Awards, where she was awarded Best Fashion Designer. And here song "Call Me JD" has attracted several suitors. In addition to being featured in a Russian fashion video, the song will appear in the critically acclaimed Greek film, Luton.

I don't think people realise the appreciation I have for them! Their support is probably the only thing that actually keeps me motivated to get my stuff moving out there. I have a great team behind me and great people supporting me. I love team dolly! xo"

Despite the prowess of her early career achievement, Jasmin has yet to perform live. And while you might chalk her up to being just another party girl, Jasmin will assure you "the time and effort I put into the studio and my music is unreal."

I love the message of art. The hidden secrets in lyrics. We put a bit of our soul in every song.