Lee Ballinger is the West Coast Editor of Rock & Rap Confidential, the magazine edited by Dave Marsh that’s known as “the conscience of the music industry.” Ballinger is a combat veteran of Vietnam who came out of the steel mills in Ohio to forge a career as a writer. He has written four books and his work has appeared in publications ranging from the New York Times to the Village Voice, from Inside Sports to Rolling Stone. Cameron Crowe, Academy Award winner for best screenplay in 2003, said of Ballinger’s short story Voices in the Sky: “A great piece of writing—there’s not enough storytelling about the real world, that big beautiful place outside between Hollywood and New York City.”

Tim "Tank" Casterline, a co-owner of Wonderland Studios and Texas Time Artist Services, began his experience in music production and recording in the early 90's. He studied composition and experimental music at Texas Tech University, returned to Austin and founded TLC Recording in Cedar Park, Texas in which he produced projects for many years, and on-location doing live sound/recordings.

Tank has been playing bass for 20+ years and has toured Texas and beyond with 500+ gigs under his belt, and has recorded on dozens of albums--from 3-piece jam rock groups to Texas blues, southern/stoner rock to math metal, alt country, country, folk, and beyond. Tank is a member of the Austin-based bands The Dealers and Peyton Gin. He is also a touring member of M.O.D. (Billy Milano's Method Of Destruction, which you may recall from critically acclaimed albums, S.O.D. or MTV videos). Tim actively develops acts, engineers/produces, and currently assists with all aspects of Wonderland Studios and Texas Time Artist Services.

I'm Siobhan and spend my time working with kids and studying a diploma of journalism. I’m a happy little writer with an addiction to crochet and chai tea. I’m an avid people watcher, movie watcher, online shop browser and within ten minutes of a burst of inspiration I find my self itching for a reflective, celebratory break during which I’ll day dream about all the amazing things that I’ll one day get around to doing.

Ringo Cisneros is a Texas A&M-Corpus Christi graduate with a Bachelor's of Arts degree who lives in Grand Prairie, Texas. He's a social media addict, devoted to helping people attain their goals in music, film, blogging, or public relations. He hopes to one day create his own music promotion company or music PR firm, surrounding himself with great people who try to thrive to become the best. Ringo recently mused, "I hope I can help ignite a spark for those who want it more than the next person."

David has been a contributing writer for CitySearch.com and Texas Monthly.

Andy David has served as the Youth Worship Leader at the First United Methodist Church of Round Rock, Texas. He led the church's CrossRoads worship services, described on the FUMC website as "the sound of electric guitars, drum sets and keyboards coming together to make a joyful noise."

Maurice Eagle is a visual artist, capturing and crafting bright, vivid live performance photographs of bands unlike anyone else.

Lauren Gribble created the Listen Here! blog in 2013, posting music reviews of all sorts. She is a current Music Business, Performance, and Technology major at Austin Community College, and has called Austin home for the past two years. Her passion for all things music, had led her to wanting to experience as much of the music business as possible. After landing an internship with local Austin coffeehouse Kick Butt Coffee, as an Events Manager Assistant, it was time to turn in a different direction: music journalism. After seeing many of the great local and national artists represented on the Coyote Music web site, interviewing bands and reviewing records seemed like a great opportunity to expand her horizons in the music world.

In addition to her musical pursuits, Lauren enjoys movies, reading, spending time with family and friends, and seeing all that Austin has to offer.

Danh is a web developer and designer whose skills have been invaluable to Coyote Music since 2011. His social media acumen has shaped our promotion strategies and content and his keen eye for web design has a powerful impact on Coyote Music's web presence.

Lynne's background in advertising, publicity, and marketing played a role in Coyote Music's development for nearly a decade.

Rock star. Entrepreneur. In that order.

Ben is a wizard. Fluent in multiple languages. Comfortable in any environment. Unhappy near Windows.

Check out NPR's website for the Obama grassroots story they did on David.

Wiley Koepp started Coyote Music in 1995 as a management and promotional tool for his own bands. These days, Wiley does most of the writing and web development for the website. Wiley is a drummer and has served as the Undergraduate Academic Advisor for The U.T. School Of Music, an A&R Rep for Farmclub/Universal Records in New York City, and a panelist at various music industry conferences.

By day, Wiley is a software developer. By night, Wiley can be found either with family or behind a drum kit.

After time spent as a concert promoter, artist manager, and booking agent, Ken Kushnick's career in the entertainment business went into high gear when he joined New York-based Sire Records. It was there that he signed Talking Heads and helped bring The Pretenders and Madonna to the label. His responsibilities included marketing, promotion, artist development relations with foreign distributors.

Additionally, Ken is a well respected Music Supervisor for film and TV soundtracks. His TV projects include MIAMI VICE. Among his many feature film projects are Look Who's Talking, Beverly Hills Cop 3, Face/Off, Muppets From Space, Double Jeopardy, and Down To Earth.

Anni Lam is the founder/owner of the Parc Landon Agency. As a media entrepreneur, she created an Internet music channel, Hong Kong Vintage Pop Radio (HKVP) for Chinese-Americans 25 to 40 years of age in 2002 to help connect Chinese-Americans with entertainment from their home country. As a business consultant, she has helped entertainment establishments such as the House of Blues market their shows to Asian Americans. Anni also books U.S. and U.K. gold and platinum artists in Asia-based venues. Anni started in the entertainment business when she was 16 by helping her concert promoter dad after school and was a marketing and brand analyst in New York. Her past clients include Elsevier Science, MTV Networks, MTV Video Music Awards, Sony Music, Conde Nast Publications' Glamour Magazine, fashion ad agencies and online retailers. She was also an executive producer at Premier Entertainment Productions in New York, producing concerts and special music events.

Director, Add Joy To Learning, a New York City after-school program that educates students about careers in the music industry.

Dave Marsh (born March 1, 1950, Detroit, Michigan) is an American music critic, author, editor and radio talk show host. He was a formative editor of Creem magazine, has written for various publications such as Newsday, The Village Voice, and Rolling Stone, and has published numerous books about music and musicians, mostly focused on rock music. - Wikipedia

He has contributed articles to music industry publications, judged talent competitions, and is a graduate of The Recording Workshop (Recording Engineering and Music Production Program). He previously worked for an Austin based research/marketing/consulting company for over 10 years as well as Anderson Merchandisers, L.P. (a NARM Nominee [National Association of Recording Merchandisers], and one of the nation's largest music distributors) in which he assisted representatives from EMI Music, Sony BMG, Universal Music, and WEA Corp with strategic marketing/placement, in-stores and special projects.

Miriam McKinney (Thompson) is co-owner of Wonderland Studios and Texas Time Artist Services and was born and raised in Austin, TX. A former member of the Georgia Tech drumline and radio DJ at WREK, Atlanta, Miriam is a graduate of The University of Texas at Austin. She attends every SXSW Conference and ACL Festival, and can frequently be found in Austin live music venues, scouting new artists.

McKinney holds a Master's degree from Georgia Tech, where she contributed to a notable research project and paper for the university covering the supply chain of the music industry (marketing strategies, promotional channels, music distribution, manufacturing, contracts, trends, projections, online music, case study of an emerging artist, music industry revenue and how artists and/or record companies make money in the industry). Miriam currently works in virtually every aspect of Wonderland Studios and Texas Time Artist Services. 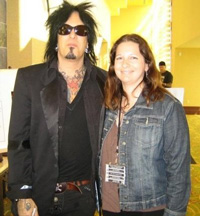 Garrett plays in a Pop Punk-Emo band called All Nighter and books and promotes concerts for Unit 65 Collective.