Walking into the Granada Theatre in Alpine, Texas, hearing the Texas Tornados' "Hey, Baby, Que Paso" was somewhat of an other-worldly experience. I used to cruise the one-way streets on either side of the Granada blasting their debut album shortly after its release in 1990. Twenty-two years later, Texas Music magazine's editor Stewart Ramser brought the band to Alpine to perform as part of the Viva Big Bend music festival and industry conference. 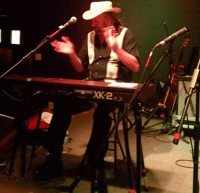 After the passing of founding members Freddy Fender and Doug Sahm, I was cautiously optimistic how the band might carry on. They'd been a supergroup, uniting four legends of Central Texas' country, rock, and conjunto music communities. Accordion extraordinaire Flaco Jimenez still performs brilliantly, still attracting a crowd of adoring female fans on his side of the stage. Augie Meyers seemed very relaxed, perched behind his keyboard with a smile throughout the night.

Doug Sahm's son, Shawn, has stepped into his dad's shoes, bearing a striking resemblance both physically and with his stage presence. Vocalist Nunie Rubio fills in for Freddy's timeless vocals and does a wonderful job, teaming up with Flaco on "Volver, Volver," the ranchera popularized in 1970s by Vicente Fernandez.

The band paid tribute to Freddy Fender, covering his hit "Wasted Days and Wasted Nights," and got the crowd rocking with Sam Sham and the Pharoah's "Wooly Bully." But it was the Tornados' original songs that whipped the crowd into a dancing frenzy (be it two-step, waltz, or cumbia). "Who Were You Thinkin' Of" and the humorously innuendo-laden "Guacamole" had the crowd pushing the chairs back from the small dancing area in front of the stage.

For those wondering what they'll get at a Texas Tornados show now that half of the original line-up has passed on, the band still puts on a fun, energetic show that gets a crowd up off its feet. As the Tornados' primary frontman, Shawn Sahm carries on his father's legacy from his cowboy hat to sunglasses and brilliant, sly Sahm smile. The Texas Tornados served as a fantastic Saturday night headlining act for Viva Big Bend's inaugural year. And if this performance was any indicator, Alpine would welcome the Texas Tornados back to town for many years to come.