The Top 10 most visited pages on CoyoteMusic.com in February 2015!

TWENTY YEARS! Coyote Music has been doing its thing since 1995. And in this 20th year we will be vigilant about bringing well-deserved attention to the artists, reviews, videos, and articles that attract visitors to our site. In the first month of our twentieth year, there are some familiar faces in our Top 10 along with a few brand new entries.

2. I Respect Music :: Marisa Tomei, Aerosmith's Joe Perry, Canadian Music Week & More - Blake Morgan will no give up until Pandora Founder Tim Westergren pays an artist what they're worth!

5. Black Angel Down at Mercury Lounge (New York, NY) on 2/7/15 - When Black Angel Down brings it to NYC, they BRING IT TO NYC. Party bus and all, this Baltimore band is a force to be reckoned with.

6. Chasca, Dead Love Club, and Sp_aces at Triple Crown (San Marcos, TX) on 2/20/15 - Chasca is a name you will begin to hear more and more as they spread their tight show and flambouyant antics across the Southwestern U.S. Their bill with Dead Love Club and Sp_aces turned a lot of heads! 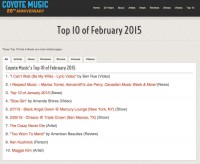 7. The Crazy Never Die - Remember last month, when I said you'd be hearing more about this band? Well, you listened. Stay tuned!

9. Ken Kushnick - Ken was Stephen Bruton's manager and the force behind the Road to Austin concert and film. Great guy, too.

10. Maggie Kim - She used to wear electrical tape over her nipples at her NYC club shows. Now she's an expat mom in Paris. Go figure!